Did you know that MoMA will be showing an Irish 1940’s Aran Sweater in their upcoming fashion exhibition 2017/8? 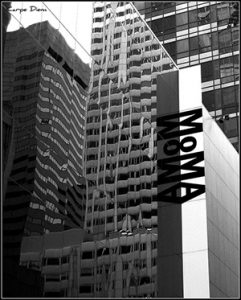 This Autumn, the Aran Sweater will feature in a major new fashion exhibition at the Museum of Modern Art in New York. A century ago, it’s just a fisherman’s gansey from the West of Ireland!

“Items: Is Fashion Modern? explores the present, past—and sometimes the future—of 111 items of clothing and accessories that have had a strong impact on the world in the 20th and 21st centuries—and continue to hold currency today. “  MoMA

The Aran is currently on loan from the National Folklife Collection in Co. Mayo. (In 1942 the “Irish Homespun Society” donates this item to The National Museum of Ireland. Their founder, Muriel Gahan, is a key figure in the Aran Sweater story.)

This Aran Jumper is certainly in good company at MoMA. The other items include style-staples like the leather biker jacket, a red lipstick, Levi 501s and a Birkin Bag….  The exhibition runs from October 1, 2017–January 28, 2018.

The Aran – A Namecheck of Stage and Screen for a Century

Aran sweaters are one of the finest fashion exports to ever come out of Ireland. But who has been making Aran knitwear famous for the last hundred years? Well, it’s like a roll-call of Irish and American stars in each generation. Since the turn of the 20th Century, stage and screen greats are wearing, promoting, marketing, illustrating, painting, writing and singing of the Aran Islands and its notorious knitwear.
In the 2010s alone, we see an illustrious list of established fashion designers releasing Aran sweaters: from Alexander McQueen to Ralph Lauren, Chloe to Valentino.

But what IS an Aran sweater? Where does it originate? What is fact and what is fiction?

But what IS an Aran sweater? Where does it originate? 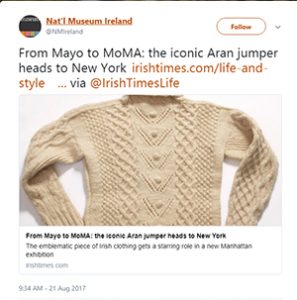 The Aran jumper takes its name from the Aran Islands on the West Coast of Ireland. Fishermen’s wives traditionally make these sweaters for their menfolk from local wool. Originally untreated, the raw wool is rich in natural lanolin, which adds a “waterproofing” layer against the waves. Prior to the 1930s, designs are simple and incorporate classical fisherman’s designs known all around the coasts of Ireland, the British and Channel Isles. Influences from Guernsey are the probably the root of the Irish word for sweater – Geansaí.

From being a personal garment made for a family member, a cottage industry now arises in the mid-1930s. Knitting needles are still scarce tools, and some knitters on Inishmaan recall using goose quills and willow rods to knit!  Stitches and designs become more elaborate. Diamonds, knots, zig-zags, cables and moss stiches are combined in vertical panels. White treated wool (báinín) replaces the familiar dark blue dyes. Training and education leads to incredibly beautiful pieces of work, with all-over patterns as opposed to the shoulder-embellished Guernsey style. The quality of the work is outstanding, showing great technical expertise. Patterns don’t exist, Irish knitters produce their designs all from training and memory!

What is fact and what is fiction? 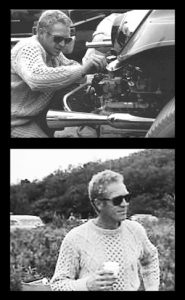 It is the late 1940s before Patons publish the first Aran knitting-pattern. In the 1950’s, they appear in Vogue Magazine, too. Soon, stories abound as to the origin of these pattern types and their meanings. People hear of how sailors who perish at sea are identifiable by the family Aran pattern on their sweater. Folk tales tend to originate with writers of the 1950’s and 1960’s who attribute stitch-designs to early Celtic influences. Later scholars and writers have “debunked” some of these popular stories, but the magic of the Aran lives on.

Anyone with Irish heritage knows that knitting stitches and family emblems pass down the female line. A knitter’s work is absolutely recognisable to other knitters! Maybe it seems like a “cheesy marketing story” to some, but the tale of the Irish Aran Sweater is romantic to its core, and filled with filmstars and celebrities, poets and painters!

How handsome is  Steve McQueen on the set of Thomas Crown Affair in 1967?

The Timeline of the Irish Aran Sweater

100 years is a long time! The back-story to Irish knitting on the West Coast is filled with history, politics, social struggles, art and film.  There are books and stories on the stitches and designs. We’ll be expanding on some of these in future Skellig Gift Store blogs.

Let’s step back in time and take a look at key events which make the Aran Sweater the iconic fashion statement of today!

In the early 1900s, The Aran Islands are the place to be! 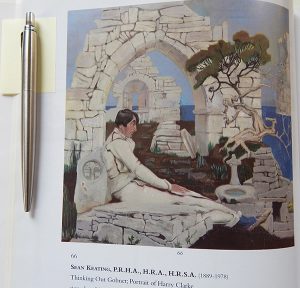 Some of Ireland’s most well-known writers and artists like JM Synge, WB Yeats, Seán Keating, Harry Clarke, and Charles Lamb travel to the Aran Islands. They all produce some of their most noteworthy works whilst living here, and romanticise the authenticity of the Western Seaboard, it’s people, language and customs. Knitting is thriving, but the Aran patterns we see today are not widespread yet.
Here, in an old Christie’s Auction Catalogue, you can see Seán Keating‘s “Thinking Out Gobnait”. It is a 1917 portrait of his friend Harry Clarke. He is dressed in white woven wool fabric (báinín) , and wears the pampooties – traditional leather shoes of the West of Ireland.

In the 1930s the Aran Sweater goes further afield.

Muriel Gahan, founder of the “Irish Homespun Society” is organising the Aran ladies to knit for her shop in Dublin. Demand increases for this once-regional jumper. In 1934 the American documentary filmmaker, Robert Flaherty, releases “The Man from Aran.” The movie is a big hit, and further popularises “The Look” of the Atlantic fisherman.

During the 1950s, production and sale of Aran sweaters is booming. 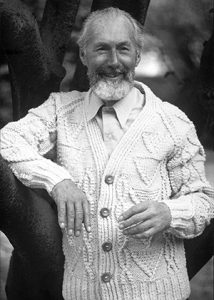 Patterns, sizing and styles are standardised and interpreted, and demand is increasing. Now Pádraig Augustine Ó Síocháin gets involved. He has spent much time on Aran too, is fluent in Gaelic and very well connected with the artists and writers. He buys out Galway Bay Products Ltd and intends to export to the USA. Irish artist Seán Keating illustrates his brochures and book “Aran: Islands of Legend”.

Exports to the USA begin for the first time. Vogue features the Aran Sweater in fashion spreads. When the Aran arrives in New York and Hollywood it is to influence a whole generation. Stars like Elvis and Grace Kelly rock their Aran jumpers. Even little Prince Albert of Monaco, just a toddler at the time, is wearing a miniature Aran on the Royal yacht! 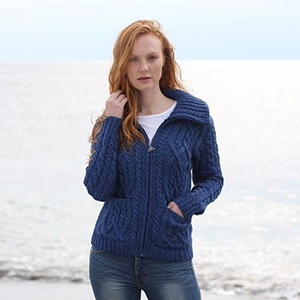 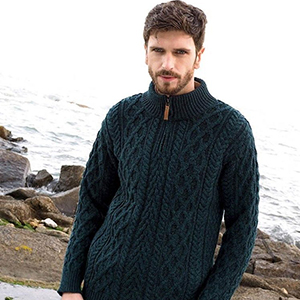 Who can forget Marilyn Monroe pole-dancing in a Baby Blue Aran and a pair of opaque tights? In 1960 she is singing “My Heart belongs to Daddy” in her film “Let’s Make Love “ 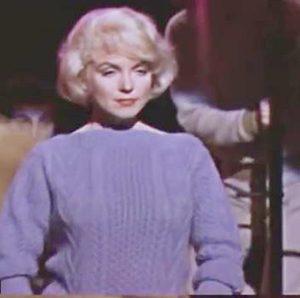 In 1961, The Clancy Brothers are hanging out in New York with Tommy Makem and Bob Dylan. They appear on the Ed Sullivan show in front of millions of American viewers. They belt out a great version of the Kerry favourite, The Wild Colonial Boy! Of course, they are wearing Aran jumpers, their trademark look. They later go on to play Carnegie Hall, and to Dinner with President JF Kennedy. (Another aran-wearing family!) 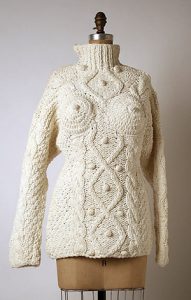 Now in the 2010’s, Aran is still an inspiration to leading fashion designers. The list of recent and upcoming collections is extensive, so let’s summarise them below:

The current 2017 Winter edition of Vogue Knitting is a collector’s edition. Guess what’s on the cover? Yup!

In next week’s blog, we’ll explore some more of the stories about the Aran and Irish Knitwear.

Thank you for reading our round-up on the Aran Sweater as a style icon.

In conclusion, the Aran has never lost its popularity. The Aran Sweater is seen on so many celebrities it’s impossible to list. Skellig Gift Store customers love the style and versatility of this knitwear!  See some of our favourites from our huge collection of Irish Designed & Made Arans : 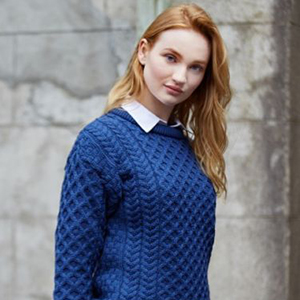 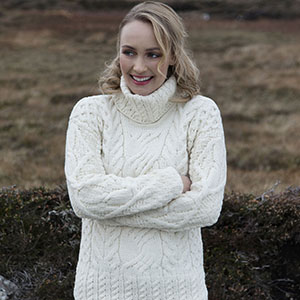 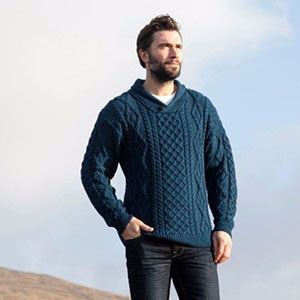 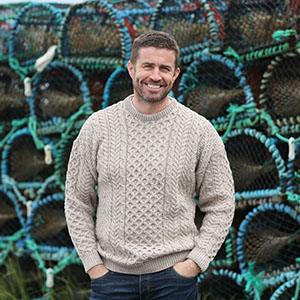 Do you want to knit an Aran yourself? There’s a great kit with wool, needles and a pattern available here: 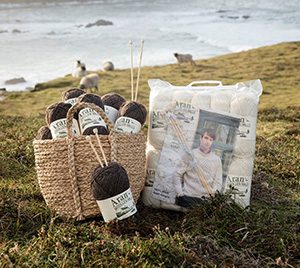 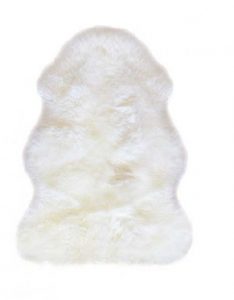 Finally, take a look at this Donegal man, Ivan Scott – the world record breaking sheep shearer!  All this wool has to come from somewhere, and the skills are still alive today here in Ireland!

Do you have an Aran Sweater? What are the stories that come with your own jumper?

We love to hear from you!

For exclusive offers from Skellig Gift Store, all upcoming sales and contests, enter in your details below.

Your cart is empty! Please check out our store or view our wide range of brands.

10% off all orders Automatically Taken at checkout on orders over €50! (non Sale Items) Dismiss

Our website uses cookies so that you can place orders and to give you the best possible shopping experience on our site. By using this site, you agree to the use of cookies. If you continue to use this site we will assume that you are happy with this.
Find out more about cookies here or check out our privacy policyOkNo